What is The Carnival Queen?

The Carnival Queen is a book, written and illustrated by Natalie Knowles, that is available in paperback or as a Kindle edition from Amazon.

The story of one summer, around the time of the Millennium, when the unlikeliest girl in town became Skelding-on-Sea’s carnival queen. Plum wants to win tickets to see the Beat Street Boys in concert at Wembley Arena. In order to win the tickets she has to enter the Skelding-on-Sea carnival queen contest. To maximise her chances of winning the tickets, she gets all of her friends to enter the contest too. They are all fine with helping their best friend achieve her dream, until they realise there is something different about the carnival queen contest this year …

In the summer of 2016 I finally got my act together and wrote The Carnival Queen. I was living in London and there was a park near my flat where I would write longhand every evening. The first draft emerged in less than six weeks; this was amazing because I had been promising my best friend this book for the previous 11 years!

I had talked up the idea when I was about 20 years old and many times over the years my friend has said, “well, when are you going to write it?”

15 years ago, I was that small town girl, from a rural seaside town in England. I did not have internet. There were no smart phones. If you wanted to take a picture you used a camera. My life revolved around music, films, TV, videogames and art. There was a shared interest in music with my friend. We consumed pop magazines avidly and were authorities on entertainment gossip and celebrities. Radio was a connection to a much larger world and if the radio wasn’t playing it was because the TV was on.

I was very lucky to grow up in a seaside town that had a really strong sense of community. The main industry used to be fishing, but tourism has since become the dominant function of the town. The carnival was always the highlight of the year, especially for me because my birthday coincided with it. There would be week long festivities at the height of summer, including a parade, a fairground, beach sports and live music.

Although the story had been percolating for 11 years, I actually got the illustrations down on paper before the story. I thought that if I could draw the 10 key stages of the story, then the words would follow. I began drawing them in 2015 and completed them in 2016. It was a successful exercise and the drawings really kept me on track when I began writing. I would follow this process again were I to write a second book (my friend wants me to write the sequel!).

Second edition of The Carnival Queen 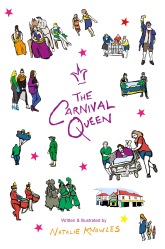 The second edition of The Carnival Queen was released in 2019. If any of you have a first edition then you are very lucky because this version is no longer for sale! I revisited the manuscript in 2019 and corrected some passages that would be in error should I actually get round to publishing Book 2 (it exists). Also, The Shopping Trip chapter was missing an illustration so I wanted to address this.

Skelding-on-Sea is totally inspired by my home town, Sheringham. In the story I mention places like the Recreation Ground, the Grand Hotel and the Teen & Twenty – these places existed.

I hope this gives a little context with regard to what influenced the story of The Carnival Queen and I hope that you enjoy it for the fun, nostalgic summer read that it is. If you enjoy it please do leave a positive review on Amazon. THANK YOU so much for your support and for taking the time and interest in my work.

Buy the paperback edition of The Carnival Queen

Buy the Kindle edition of The Carnival Queen